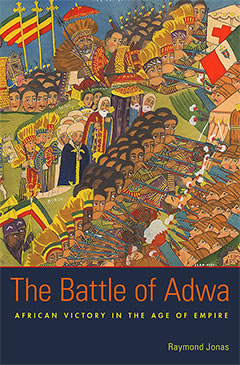 The Battle of Adwa: African Victory in the Age of Empire is the first comprehensive account of one of the most important events in the history of modern Africa. The battle of Adwa (1 March 1896) was a stunning victory for Ethiopian forces but a rout and a disaster for Italy. Adwa is deeply interesting in its own terms because Ethiopia is the only African country successfully to resist European colonization before 1914. However, it is Adwa’s global context that makes the story compelling because Adwa – the story of Africans seeing to their own freedom – played out against a background of almost unrelenting European expansion into Africa; it also resonated powerfully in the African diaspora, notably in post-Emancipation America where hierarchies of race and ethnicity were only beginning a process of challenge and renegotiation. (Harvard, 2011)

"[Jonas has given] us a masterly account of one of the most dramatic moments in the modern history of Africa." -- Bahru Zewde, Professor Emeritus, University of Addis Ababa, Africa Review of Books 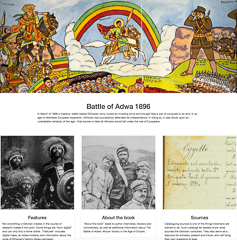 BattleofAdwa.org supplements and extends The Battle of Adwa: African Victory in the Age of Empire (Harvard, 2011). It features maps, commentary, photographs, a timeline, author interviews, and a complete archival and print bibliography. 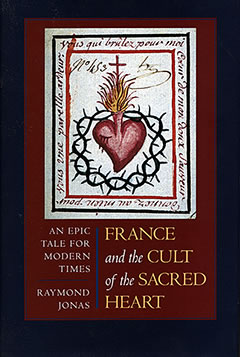 France and the Cult of the Sacred Heart; An Epic Tale for Modern Times is a history of the political culture of counter-revolution after 1789. It extends the concept of political culture to the built environment, showing how the construction of the basilica of Sacré-Coeur on Montmartre represented the apogee of counter-revolutionary political culture and formed its most tangible and durable expression. The Sacré-Coeur was astonishingly modern enterprise; it was one of the first major European architectural commissions awarded not via patronage but by open competition - there were 80 competing designs. Its sponsors were brilliantly innovative in their fundraising. Project brochures, donor newsletters, “shareholder” certification, hosted site visits, souvenir sales, visualization tools, “naming opportunities” – most of the techniques we associate with modern fundraising were present in full or incipient form. (California 2000, Chinese editions 2003 and 2010) 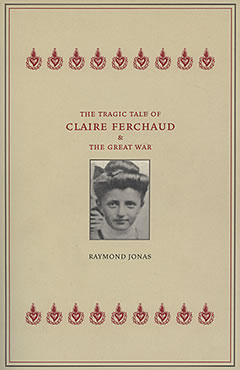 The Tragic Tale of Claire Ferchaud and the Great War explores the boundary between sanctity and hysteria. Although 1914 brought national integration across Europe – regionalism was effaced, workers became patriots, cold civil wars were set aside in the name of national unity – there were emphatic exceptions. The story of Claire Ferchaud follows a modern Joan of Arc as she moves from a culture that sustains her visions of apocalyptic victory to one that condemns them as symptoms of pathology. The book also functions as a brief history of the Home Front in France during WWI. (California, 2005)

"The story is so well told it is almost impossible to put down...one is amazed at the combination of narrative power and scholarship. A deep pleasure to read" -- Bonnie G. Smith, author of The Gender of History: Men, Women, and Historical Practice 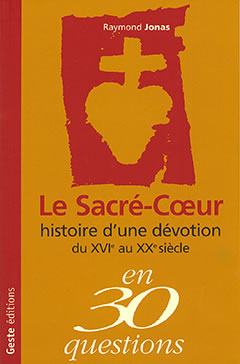 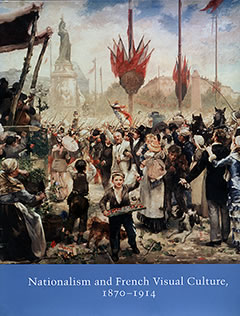 “Vox Dei, Vox Populi: Sacred Art and Popular Politics in the French West” in Nationalism and Visual Culture (series title: Studies in the History of Art), June Hargrove & Neil McWilliam, eds, (Washington, DC: National Gallery of Art and Yale University Press, 2005):195-207. This article took shape as a talk I gave at a conference sponsored by the Center for Advanced Study in Visual Arts (CASVA) held at the National Gallery in Washington, DC. I talked about the revival of stained glass as an art form in the middle of the 19th century and the concomitant move away from conventional sacred and hagiographic subjects, even in sacred settings such as places of worship. When secular subjects were presented within an art form normally reserved for sacred subjects, the effect was charismatic -- it conferred an aura of sanctity. I also talked about stained glass as a kind of “serial art” and I pointed out how it related to other forms of serial art of the era, including political cartoons, notably those used during the Dreyfus Affair. 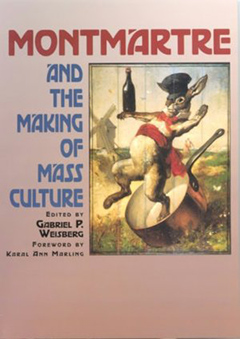 "Sacred Tourism and Secular Pilgrimage: Montmartre and the Basilica of Sacré-Coeur," Montmartre and the Making of Mass Culture, 94-119. Gabriel Weisberg, editor, New Brunswick, NJ: Rutgers University Press, 2001. This essay came out of a conference held at the Minneapolis Institute of the Arts, the gorgeous neo-classical art museum for the Twin Cities. I spoke about the place of pilgrimage in the invention of mass tourism. In a review on H-France, Jerrold Seigel remarked that “…what makes Jonas's contribution so interesting and suggestive is his demonstration that in many ways pilgrimage ... was itself a form of mass culture, and one with surprising ties to more secular ones.” 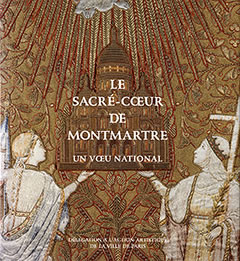 « L'Année Terrible, 1870-1871» in Le Sacré-Coeur de Montmartre; Un Voeu National, Jacques Benoist, ed. (Paris: DAAVP, 1995), 31-41. This piece came out of a conference sponsored by the DAAVP, la Délégation d'action artistique de la ville de Paris - in effect, the cultural ministry of the city of Paris. The conference brought together, for the first time, the descendants of the great antagonists of nineteenth-century Montmartre -- the partisans of secular, belle-époque Bohemia and the critics of Bohemian decadence. As an American and thus an outsider it was a pleasure to be part of an event that carried the echoes of the great battles over religion and laicité. 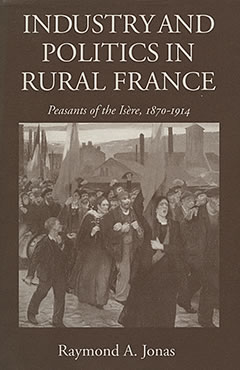 Industry and Politics in Rural France, 1870-1914 takes the standard industrialization story of peasants becoming workers and turns it sideways; it looks at what happened when peasant women took jobs in rural textile mills while men continued to cultivate the land. Most jobs in textile mills were typed "female" so it was women rather than men who were drawn to the factory. As women concentrated in milltowns, they dominated village life by sheer weight of numbers. Meanwhile, working class institutions – labor unions and political parties – struggled (often clumsily) to come to terms with workers who failed to fit the canonical profile of the heroic proletarian, that is, propertyless and male. (Cornell, 1994) 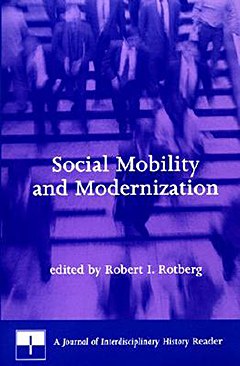 "Peasants, Population, and Industry in France," A Journal of Interdisciplinary History Reader, Robert Rotberg, editor, (Cambridge, MA: MIT Press, 2000): 263-286. This piece explored the role of rural industry as a practical and a rhetorical alternative to the decline of the peasantry. It also had an interesting technical angle. I wanted to show the demographic impact of industry on villages and rural towns. Rural industry attracted population during the early boom years, then expelled them in contractions under competitive pressure – in an Annales-inspired moment I called these movements ‘demographic respirations.’ Using self-written data-entry software and a hefty laptop computer, I keyed-in detailed archival census data for dozens of villages across several decades. I didn’t want to confront the reader with dense numeric tables, so I used graphical (AutoCAD, Photoshop) and mathematical software (123, QuickSurf) to map complex demographic data as isopleths. In effect, I invoked the analogy of contours in the landscape to show demographic change as ‘peaks’ and ‘valleys’ that the lay reader could easily interpret. This 1991 article was selected for republication in A Journal of Interdisciplinary History Reader (2000), a volume featuring the best articles in over thirty years of publication of the Journal of Interdisciplinary History. 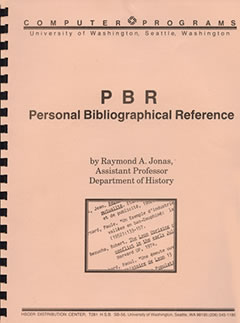 My first publication was a piece of software. When I was writing my dissertation, I needed something to manage my bibliography. I learned how to program and wrote PBR - Personal Bibliographical Reference. I was by no means an ace programmer, but PBR did the job of entering, storing, sorting, and retrieving article and book references. It also formatted and printed the references according to the Chicago style. I arrived at the University of Washington at at time when universities were starting to look at faculty-authored software as a possible revenue stream. (Wisc-Ware at the University of Wisconsin is probably the best known such effort.) The University of Washington picked up PBR, dressed it up, and marketed it. The package consisted of the software on a 5.25" floppy and a spiral bound manual. I don't believe the University made any money. It serves mostly as a relic of a moment in the history of university technology transfer -- and the days when software came on a disk. 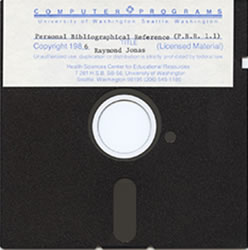